It has arrived. What was once inconceivable began as a faint whistle from a distant meadow. It grew to an approaching rumble and is now a steaming, chugging, creaking, imposing presence that looms over me. Towering, it stirs up awe and fear, uncertainty, and maybe delight. But a little more creaking than I’m happy with.

Well, tomorrow I’m 40. Today is the last day of my 30s. But now I know it’s here. All the tomorrows have come and gone for this one.

There was an age when the collection of days passed that would total 40 years was unimaginable. But as they do, the days have rolled by into months and seasons and then years. The summer has waned and fall has arrived. A fall of 2016, and also my life. I’m on the other side now. The view up the mountain was good, it’s fantastic from the top. But I see where I’ve been more clearly than where I’m going. 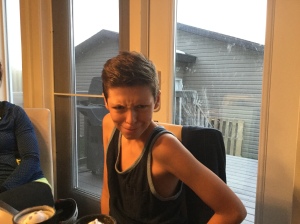 The possibilities are endless.

Yesterday my sons got haircuts, a little different than they usually get. They looked in the mirror and speculated on what everyone might think of their new appearance with anticipation. I miss those days. When innocence was an unnoticed guest in every conversation. When disappointment could still be converted to opportunity. Skin was thin, but memories were often short.

When I was 10 I didn’t plan anything. Except to buy junk food. I would scour for change that would add up to what I needed. A quarter could buy you something, even if not much.

Now there are quarters everywhere. But never enough quarters to add up. I always need to get more.

When I was 13 the future was endless possibility. I could be a star quarterback, a star point guard, and also a movie star in between games. Then off to the ring to defend a heavyweight title. It would be a great life for a bestselling novelist.

Now, the future is an accommodation of sorts. What do I do to make the best use of what I have?

But speculating on the next 40 years tells me that now that I know a better question, or at least know to answer a question of some kind, I still don’t know how to answer it. I don’t quite know how to channel those years to get the quarters I need, plan the meetings that matter, and consider what hasn’t even been on the mental agenda yet.

I’ll let you know in another 40 if I chose right.